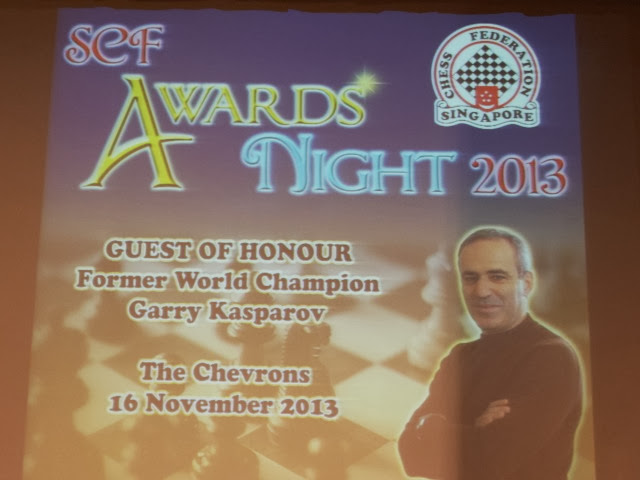 Former World Chess Champion Garry Kasparov was the guest of honor at the Singapore Chess Federation Annual Dinner on 16 November 2013. As expected, Mr Kasparov was a major draw, with chess fans and many juniors from the SCF training schemes requesting autographs and photos which the former World Champion kindly obliged with good grace. Mr Kasparov also helped the SCF raise funds via the auction of autographed copies of his My Great Predecessors and Garry Kasparov on Modern Chess book series.

Mr Kasparov’s keynote address was noteworthy for the his insights on the benefits of chess in raising self-esteem, teaching determination, self-motivation and sportsmanship, the current state of the world game, how chess could attract more sponsorship and support and the role of technology in chess.

The dinner was also the occasion for the launch of the Kasparov Chess Foundation Asia-Pacific to be located in Singapore with a generous direct donation by the Foundation to the SCF. 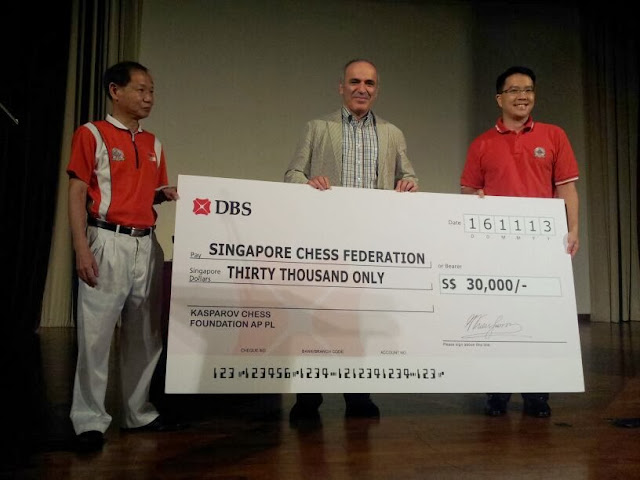 The SCF would like to thank Mr Kasparov for gracing the Annual SCF Awards Night with his presence and generosity which was inspiring for all.

All participants are to take note that there are limited parking lots available at The Chevrons.

Alternative Parking are available nearby.

The Singapore Chess Federation (SCF) is organising the “SCF Awards Night 2013” on 16 Nov 2013 to recognise the achievements of players as well as to raise funds for our operations which includes, organising local chess competitions, participation in international events, training our National and Junior Squad.

At this event, Kasparov will launch the Kasparov Chess Foundation Asia Pacific which will make an initial donation of SGD30,000 (thirty thousand Singapore Dollars) to the SCF to fund chess activities in Singapore. Kasparov will also be announcing the objectives of his foundation and other chess initiatives for Asia Pacific.

All National Junior Squad members with at least 75% attendance over 4 terms (Term 1 to Term 4 2013), will receive their Certificate of Attendance presented by Garry Kasparov at the SCF Awards Night.

Do note that only juniors who are in the National Junior Squad training for at least 2 terms in 2013 are eligible for these certificates.

The Singapore Chess Federation will be holding its Awards Night 2013 with the details as follows:

Dinner tickets are available for sale to all students, members and affiliates
of the Singapore Chess Federation.

All interested participants are to submit their Booking Forms to the
SCF office (51 Bishan Street 13, # 02-01A SIGC, Singapore 579799) or
email This email address is being protected from spambots. You need JavaScript enabled to view it.  by Friday, 01 November 2013.

All others interested in attending may contact the SCF at This email address is being protected from spambots. You need JavaScript enabled to view it. .

Coaches will be provided to ferry all NAG 2013 participants from Jurong East Sports Hall to The Chevrons.