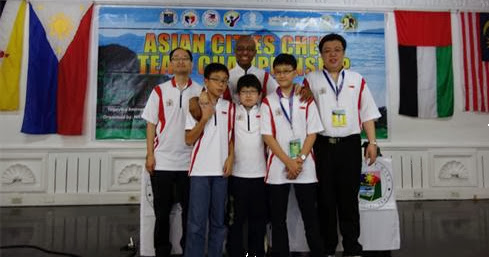 Team Singapore, represented by Tin Jingyao (13 years old), Ashvin Sivakumar, William Woong and Lee Qing Aun (all 12 years old) was the youngest team at the recently concluded Asian Cities Chess Team Championship in Tagaytay City Philippines. The team performed creditably defeating 3 teams that were rated much higher than them ie Abu Dhabi (UAE), BS Begawan (Brunei) and Erdenet (Mongolia) and drawing with Kuwait. The team suffered heavy defeats to Manila (Philippines), made up of 2 GMs, 1 IM and 1 WFM, and Wuxi (China) led by GM Wei Yi (rating 2580) but earned their opponents respect with their gutsy performances. The team displayed great camaraderie – learning, playing and growing together. For more details please see the reflections of the team manager.

SCF HPE is pleased to announce the following players selected to participate in the Asian Cities Chess Team Championships:

The team shall be accompanied by Team Manager Dr Lee Chien Earn.

The National Chess Federation of the Philippines has the honor to invite all Chess Federations in Zones 3.1 to 3.7 affiliated to FIDE to participate in the Asian Cities Chess Team Championship for the Dubai Cup from 19-27 October 2013 in Tagaytay City, Philippines.

All National Junior Squad members who are interested to participate are to submit their names for selection to This email address is being protected from spambots. You need JavaScript enabled to view it.  by 25 September 2013, 6 pm.